Make the Play Monday - The Gray


Mastery of the Unseen is maybe the deepest, most interesting -- even pregnant -- card printed at any time in the Modern era. I'll be the first to admit that I misevaluated it the first time or two I looked at the card.

Seems like a way to get some card advantage, I thought (and I bet lots of y'all thought, with me); but slow.

Once upon a time Jayemdae Tome was the most powerful card advantage engine available to Standard Magic: The Gathering players. No, really: Jayemdae Tome.

It's been quite some time since a card that follows up some initial investment followed by a continual tax of four mana, turn after turn has been good enough as a card advantage engine. For years it's been purely about the immediacy of translating mana into cards. A Divination draws far fewer cards than an old school Jayemdae Tome but it doesn't ask for twelve mana before it gets you two fresh looks.

So yeah, it was easy to miss how good this card could be.

But don't forget another old school source of card advantage became good enough to win a Pro Tour once you cut the initial investment down to two mana, even in this Modern era:


Part of what makes Mastery of the Unseen is that it can fill so many different roles effectively. It can be “just” a Jayemdae Tome (getting you ahead a card, four mana at a time) for when you want to fight on that dimension.

And while getting a generic 2/2 creature for four mana is probably weaker than just drawing another card (that can, among other things, help you make further land drops), you do kind of get a mana or two back in the investment it would have taken you to get a threat down on the battlefield; plus you can use Mastery of the Unseen multiple times per turn.

Over the past couple of episodes of Make the Play Monday / Flores Rewards Friday we have been looking at a particular deck that has made ample and varied use of Mastery of the Unseen. The card first made a substantial impact in Ben Stark's RW deck, before its best-known contributions to GW Devotion. If anything, the only thing holding this card back is that you can't get any juice out of it beyond some 2/2 creatures unless you play a relatively creature-rich strategy (which is about the only thing that is keeping Mastery of the Unseen from being some kind of Nassif-bonkers in UW Control).

This is a BW Constellation creature deck that I sketched out a few weeks ago based on Forrest Mead's deck from Grand Prix Miami.

Much to my surprise, the most exciting draws from that deck tended to come after I played a second turn Ajani's Pridemate. The least I could do was play a fourth copy!

Consequently I wanted to push both the life gain and constellation elements of Mead's deck a bit.

For example if you are going to play six total Hero's Downfalls and Banishing Lights I think it is probably okay to favor Banishing Light, which makes for more life gain potential with Underworld Coinsmith as well as every other constellation synergy in the colors.

I can't imagine that this version of BW in particular will survive the full transition from Fate Reforged Standard to Dragons of Tarkir Standard, but I wanted to get in a bit of the BW mindset given the schooling I got recently from Patrick Chapin on our mutual podcast.


I wasn't sure what to do with Ojutai Exemplars but the card seemed like it should be playable to me. A 4/4 for four would have been a complete all-star some years ago, but in 2015 just that stats-to-cost ratio is not compelling enough, but add the ability to protect itself from removal and you have a card that can do much of the same kind of work as a Siege Rhino. Ojutai Exemplars can discourage blocking with first strike, avoid blocking completely (or Stave Off attacking) by tapping creatures, and of course dance around Doom Blades effortlessly.

Patrick suggested BW as the initial Ojutai Exemplars shell, so I wanted to at least get in the right frame of mind even if I don't have all the Dragons of Tarkir resources yet.

Here are some scenarios that use the Mead-ish list, but tug on some evergreen game play elements. SCENARIO ONE (easy mode)

This one is just to get your BW brain-juices flowing:

The opponent has started on Swamp and launched a Thoughtseize full-on into your face.

Mastery of the Unseen.

His taking Mastery of the Unseen may or may not tell us something (or maybe he just thinks it's the best card we have available, having left us Underworld Coinsmith, Banishing Light, and Ajani's Pridemate).

We pull a Lightform, putting us on this hand on our draw step: 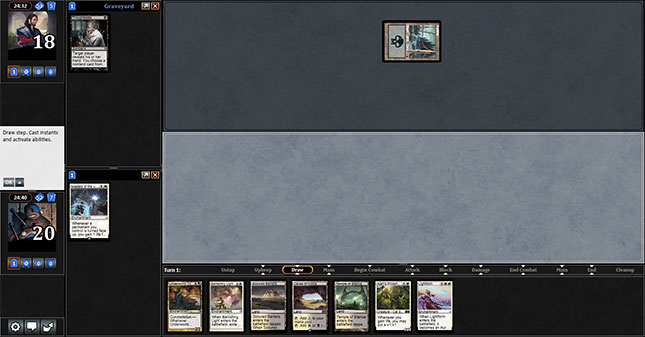 The game has progressed nine turns.

We've gone back; we've gone forth.

The opponent has got some serious resources (in every way you can read that, but color).

Our combination of lifelink and Underworld Coinsmith has kept us relatively healthy despite a steady offense by the opponent...

And a bunch of Herald of Torments on the part of the opponent (combined with our flying elbows) has gotten the opponent down to six despite his having an early Whip of Erebos.

Right here right now this is what the board looks like:

The opponent did not actually Demonic Tutor with his Sidisi, Undead Vizier; I suppose just having a 7/9 flying, lifelink, deathtouch legendary creature was enough for him.

We've got an opponent with only two open, and no cards in hand.

Blood in the water?

We opened on Scoured Barrens and picked up our twenty-first life point; then followed up with a Plains for Mastery of the Unseen.

On the draw, it's our third turn. We have no knowledge of the opponent or his deck beyond the Sandsteppe Citadel, Temple of Silence, and Forest he's played.

So three scenarios this week:

Go put your answers to these three scenario questions in the comments below!

Oh, why should you do this?

This is Make the Play Monday!

At Make the Play Monday we focus on specific scenarios and situations, and ask the TCGplayer community to weigh in on them.

Our belief in this column is that Magic is ultimately a game of decisions, and that learning to make better decisions, consistently, is the best way to improve your chances to win at Magic, long-term.

Every Monday we ask these kinds of questions, and every Friday we come back. I bring along a Celebrity Guest, and we all discuss our various plays.

In order to thank you for your time and participation, TCGplayer generously offers gift certificates to one lucky participant who agrees with my read of the scenarios, as well as one who agrees with the Celebrity Guest's.

What are you waiting for?

(See you for Flores Rewards Friday.)